order to scientifically establish if the Lifestart Growing Child programme could actually make a difference to parenting and child outcomes in ways that would improve children’s life-chances, it was rigorously tested by independent evaluators through a randomised controlled trial from 2008-2014. Alongside the trial a qualitative process evaluation was conducted to explore the pathways through which the programme works (in other words not only if it works but how it works!)

The RCT evaluation represents a robust test of the effectiveness of the Lifestart Programme on parent and child outcomes. A rigorous experimental design was used to ensure that the 424 participants across Ireland were randomly allocated to either the intervention or control group. At baseline (pre-test) these two groups were equivalent in terms of both demographic characteristics as well as pre-test measures of the outcomes. This balance between the two groups increases overall confidence that the improvement in outcomes for the intervention parents and children at the end of the study is an unbiased reflection of the impact of the programme.

The findings from the Lifestart longitudinal study are also consistent with, and add to, the wealth of evidence which shows that home based parenting programmes (like Lifestart) are an effective and cost effective way of improving parent and child outcomes in the short and long term.

Key Conclusions of the Study 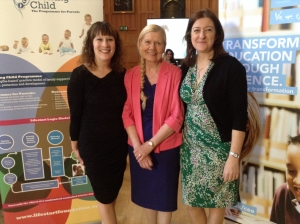 What the results mean in context

The results of the Lifestart evaluation adds to the weight of evidence which shows that home visiting programmes are an effective means of improving parent and child outcomes and the effect sizes in this study have proven to be commensurate with those reported in a number of meta-analyses.

The full technical report can be accessed at: www.qub.ac.uk/cee